First of all, what are they... MOULDS? Moulds are microscopic plant-like organisms, related to mushrooms, yeast and mildew. They can be found everywhere, but mostly they like: shower surfaces, curtans; area right outside shower, tub, hot tubs or jacuzzis; window sills (around window), under kitchen and bathroom sinks, basement, garage, locker rooms, poorly ventilated closets, wallpaper, drywall or insulation, clothing and hockey equipment.

Indoor mould spores indicate mould growth, which indicates mycotoxin production. For example, Stachybotrys sp. (one of the most dangerous black moulds) produces around 170 known mycotoxins. Exposure to mould occurs when people inhale mould spores. Unfortunately, mould is also one of the most common allergens on the planet. Now we can measure and identify spores.

What is a mould count? A mould count tells us the number of mould spores counted in a standart volume of air at a given time and place. In general, indoor mould spore concentrations should be similar to or lower than outdoor levels. If spores indoor are at elevated level, this should be a signal for indoor amplification of the mould. For some toxic moulds (such as Stachybotrys sp.) even very low level of spores requires futher evaluation. We always use outdoor sample as a reference. 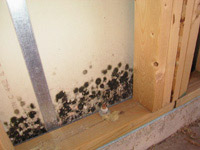 Bulk samples (wood fragments, wall paper, carpet segments, drywall, mattress fragments, clothes, furniture) for Direct Microscope Analysis (DMA). This is the best type of sampling for the visual mould growth. Samples will be examined under the microscope for mould growth. Mould types present on the sample will be identified and reported in the rank order. 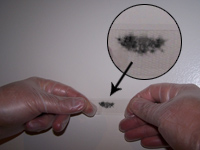 Tape-lift for Direct Microscope Analysis. These samples can be collected using clear tape by pressing the adhesive side of the tape to a test surface and removing the tape with a steady force. This smapling method very useful for visual mould growth. Mould types present on the sample will be identified and reported in the rank order. 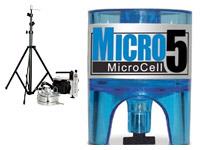 Air Sampling or Spor Trap method. We work with 2 types of cassettes for spore trap analysis. Sample analysis includes identification of all fungal (moulds) spores present, quantification to spores percubic meter of air (spores/cubical meter) and general assessment of mould fragments and non-fungal (hair, dust, dogs/cats hair and etc.) debris. Air samples (Air-O-Cell and Micro5) taken before and after moulds remeditiation. This type of sampling has a big advantage in revealing hidden moulds.